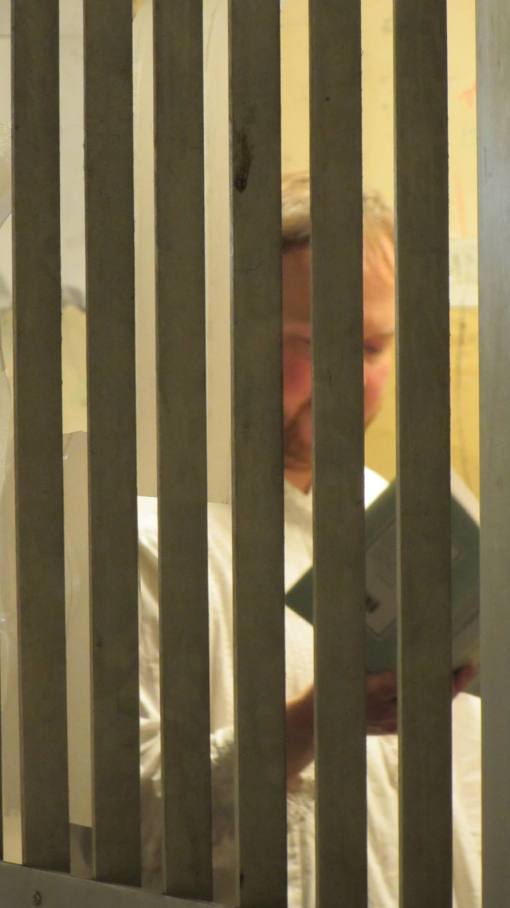 Thanks to Moritz Malsch for this photograph

So I’ve been back from Berlin for just over a week now. Putting down a few reflections here about performing Subject Index for the SOUNDOUT! Festival that are sitting somewhere between fresh and processed experience. More on my Berlin experience generally will follow probably on other posts – so many conversations, readings and sideshows!

Here firstly I’ll say I feel like I had one of the most intense weeks of living yet. Hot on the heels of 35th birthday and in the wake of a relationship changing course I knew that going into the contested cultural ground of Berlin to read all of Emily Dickinson’s 1775 poems in public at the SOUNDOUT! festival, was going to keep the heart stirring and held prised open. I wanted that. It felt a fought-for moment to go inward with Emily as my Virgil-like guide.

The Dantean underworld reference is perhaps appropriate as the location the festival organisers had found for my reading was in the U-Bahn, underground train station Mehringdamm. Travellers and citizens would come across me, voice first, as they descended the steps of the North entrance into the tube and walked along a longish tiled passageway to a caged area I was semi-concealed in.

I arrived at the venue straight from my flight; Tom Bresemann, one of the directors of the festival, showed me the space. We swaggered up to it beers in hand Berlin-style, and I knew I could work with it. It was different as a starting point from the Interview Room 11 space I had read in last year at Forest Centre Plus in being blatantly jail-like, rather than the inverse of that, with listeners approaching a position of power in the old job centre: but in terms of separation of audience and performance spaces, good audibility and acoustic, and a sterile, uncomfortable environment, Emily Dickinson would be perfectly ‘homeless at home’ – as she formulates in the poem numbered 1573 in Johnson’s edition.

However, things weren’t to unfold simply. The station staff hadn’t heard about the performance installation and refused entry when we arrived to start the readings. From that point, I set out on a peripatetic few days of fashioning makeshift installation spaces while Tom B continued to negotiate getting me into the U-Bahn.

There was an advantage in this false start. Each day was different and as I set up, I was acutely aware that there was no designated place for me. That was interesting to think about on it’s own, that I was trying to insert an action into spaces that resisted it more or less. I unfurled my large paper poem-map and stuck it onto a new wall, ready to see how people would react as I read variously in a green-room, on a busy street, in a domestic passageway. Moving the frame each time therefore, I could see the effects of the shift on the work. With each suggestion for location, I was matching the ambitions and expectations of the festival organisers to my own ultimate boundaries for the performance as I found them through the attempts to make each variation successful: learning what was and what wasn’t the place of and for the work.

Of course it was hard gearing up for something, and then not knowing if I could proceed in the way I had envisaged, but it was also a necessary risk, perhaps a very un-Dickinsonian one, to put myself boldly into these different situations to see how I would adapt the idea.

I thought a lot about whether the majority of passing people were hearing the English words as only foreign sound, and if so, what that limited experience would effect on their imaginations. At times, people broke through the ‘fourth wall’ and addressed me directly, so that I had to think about whether I could break my own spell and speak to them. Initially, I always did, as it seemed rude not to in context, and indeed on the fourth day I had no choice but to reply when, finally in the station, a train manager tried to throw me out of the space (luckily I had papers by then!). But despite the lectures from American street poets in how to force people to listen, despite the enquiries in German for train information and the couples requesting selfies with Emily Dickinson, by the fifth and final day I was feeling pretty uninterruptable, on the ‘home’ strait, and I was comfortable with that. I got the performance back, finding again where it was that I wanted to pitch it and learning how I could work harder to create that space with less of  the safety net than I had had back in old Schottland.

On that last day, reading the delicious selections of Johnson’s undated poems at the end of his ordering, as the trains bass-speaker-throbbed below and blew breaths of warm stale air up the tunnel which flapped all the plastic sheets of my barred installation, I had rare moments of being alone (or thinking I was) with the work and felt the literature performance was at its truest.

OK, I can’t resist ending with a poem by Emily Dickinson. This one shocked me in its frankness and openness to violent intervention through revolution. Was great to have the experience of being the earth for her imagination particularly when the poems were, as I hoped, unexpected. This is 1082 in the Johnson edition:

But except its Russet Base
Every Summer be
The Entomber of itself,
So of Liberty —

Left inactive on the Stalk
All its Purple fled
Revolution shakes it for
Test if it be dead.