In my last post I wrote about the Sampler week at John Hansard Gallery in February. I next visited in April, and the Gallery was in a funny in-between state, having been open to the public temporarily, but now closed again in preparation for the official ‘proper’ opening of its spaces in May. There was exhilaration in February at having got the doors open. Now in April, there was a sense of taking pains through the detail work with a last chance to get things absolutely nailed down, in some cases literally, before the building was permanently opened.

The installation of the launch exhibition, ARTIST ROOMS: Gerhard Richter, was underway. The work wasn’t on the walls yet, but everywhere the technical team were measuring and making the place ready. I was able to do some writing around the spaces, with the ghosting works of Sampler still visible in some places so that it reminded me of my initial visit to the old John Hansard site on the Highfield campus. Then vinyl from previous shows was redundantly continuing its indication on the wall. This visit though, a site was turning round, rather than winding up.

There was a public reading this visit, with Nazneen Ahmed and Dinos Aristidou, who are the writers-in-residence respectively at Southampton libraries and the Mayflower Theatre. Matt, who as ArtfulScribe is overseeing and facilitating all of our loosely-linked residencies, organised a lunch for the four of us to get together and share experiences. This was really welcome, as we’d been active at slightly different times, and knew about each other’s activities despite not having met. Our reading, that evening at Mettricks, was chaired by Carole Burns, head of the Creative Writing department at Southampton Uni. 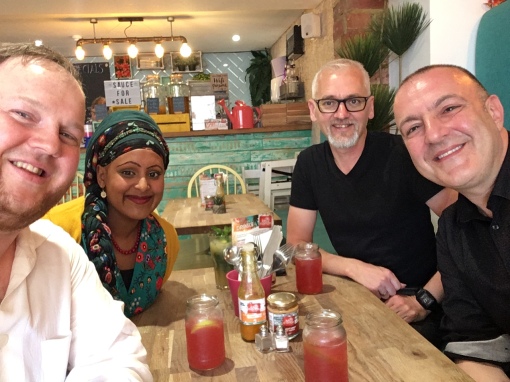 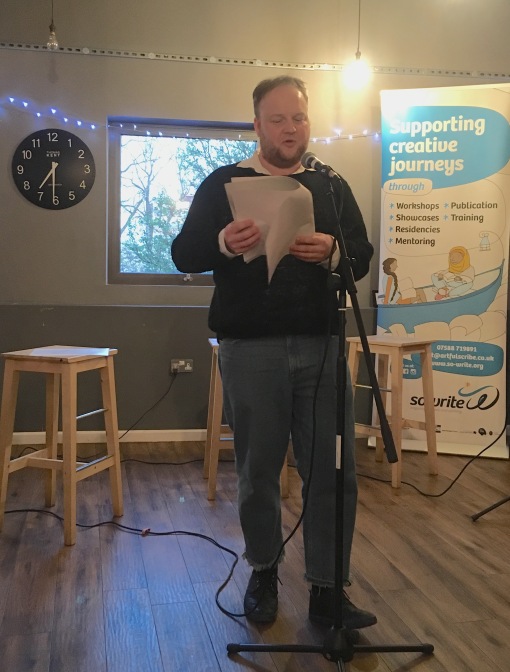 In these and other connections that the residency is allowing me to make, I am grateful for the shared perspectives, whether it’s on practical matters such as good residency programmes and potential funders, or different approaches to the way our work engages with personal narratives. Always interesting to stop and think about your own progress with people who understand the commitments and ambitions you might be balancing as someone making your way as a professional writer.

When I returned to Southampton for my current visit – I’m here now – the mood had lightened. It was the day before the Richter previews, and everything seemed in place, or close enough to in place not to be panic-inducing. It was lovely to see the staff all who had worked so hard towards this moment, all taken complex and personal personal routes to this point, celebrating together and enjoying the attention of  interested and supportive parties like Arts Council England, the University, local politicians, artists and press.

I had my camera out for the previews, recording some footage from peculiar angles for my film poems. As ever I was trying to pull back from the art and the individuals, and capture some of the social feel and the paraphenalia of the event. 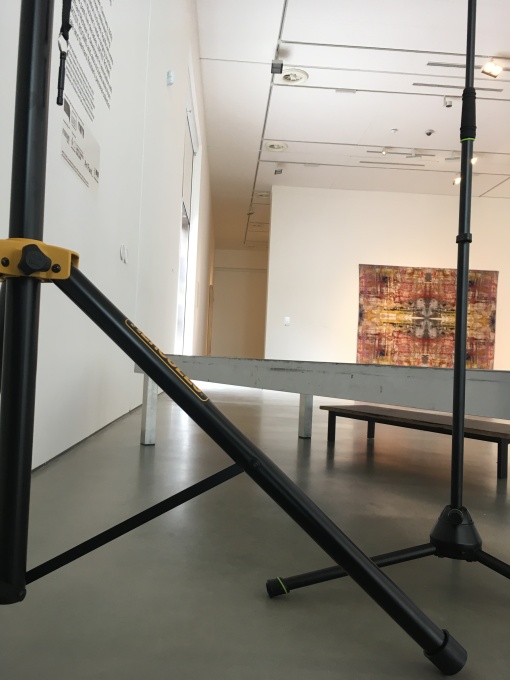 still from footage for film-poem in the making

Writing through public speeches was a subtly different prospect from previous note-taking that I’d done; the language being used was so measured and a lot of necessary ritual included. I’m seeing what comes together out of that captured and remixed language in the poem-text I’m putting together to encompass this whole period from the April visit through to this climax point.

On this visit, longer than previous ones, I’ve more time for this nuts and bolts aspects of the writing job. I’ve gathered all my finished and in-progress material to date, and I think the overall structure of the final text is clear. It will start from the December visits to the old gallery, sweep through Sampler and the Richter opening, and end with a final piece of writing from Stephen Foster, the former director’s valedictory show, which opens in September. It will be a palindrome of sorts, or maybe more a mobius band, taking us back to the same place, but somehow on the other side of the page.